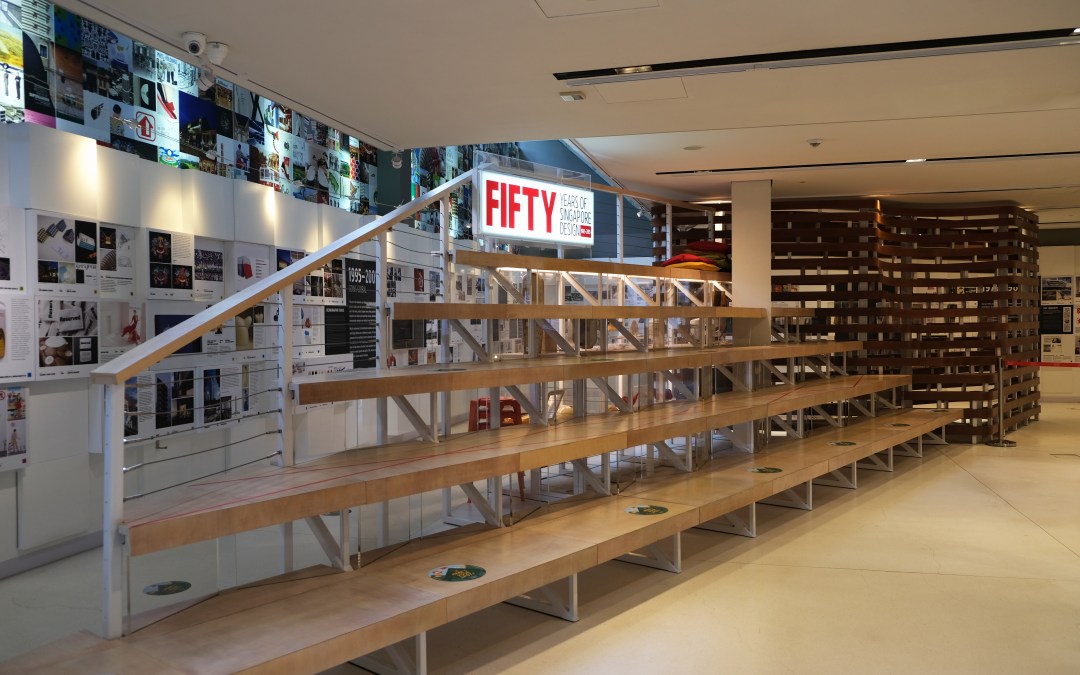 Whenever people mention about how Singapore came to be, most will associate its success due to various economic policies, such as trading or banking. However, did you know that design also played an important role in building the foundations and success of Singapore as a nation?
To commemorate the contribution of design on Singapore’s economy and nation-building over the last five decades, the DesignSingapore Council launched the 50 Years of Singapore Design (FYSD) exhibition. The exhibition featured a collection that spans across Visual Communications, Product and Industrial Design, Fashion and Accessories, and Environmental Design.

The Journey of Singapore Design 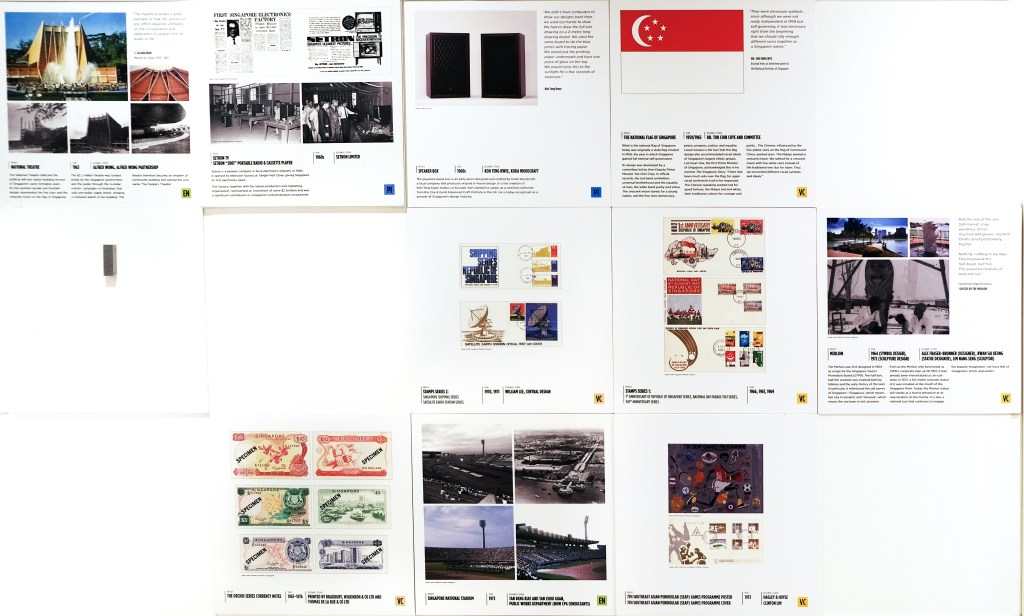 After gaining independence in 1965, the creative efforts of this period were focused on nation-building. The skilled labour were employed to meet the demands of domestic needs, like establishing civic institutions, constructing public buildings, and setting up the infrastructure for a newly industrialised economy. During this period, there was no semblance of a design scene in Singapore as it was geared in the development of skills and talent. Vocational institutions that taught craft and design skills were established to create a skills-based workforce. This was demonstrated in the first plywood speaker box that was designed and manufactured in Singapore. As someone working in the electronic industry, this exhibit was astounding as I admired the amount of manual work, skills and precision needed to create the speakers. 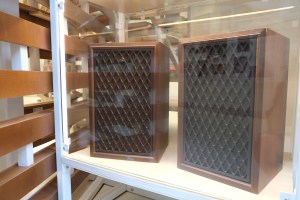 “We didn’t have computers to draw our designs back then, we used to draw the full size drawing on a 2-meter long drawing board. We used the same board to do the blueprints with tracing paper. We would put the printing paper underneath and have one piece of glass on the top. We would carry this to the sunlight for a few seconds of exposure” – Koh Teng Kwee, Koda Woodcraft 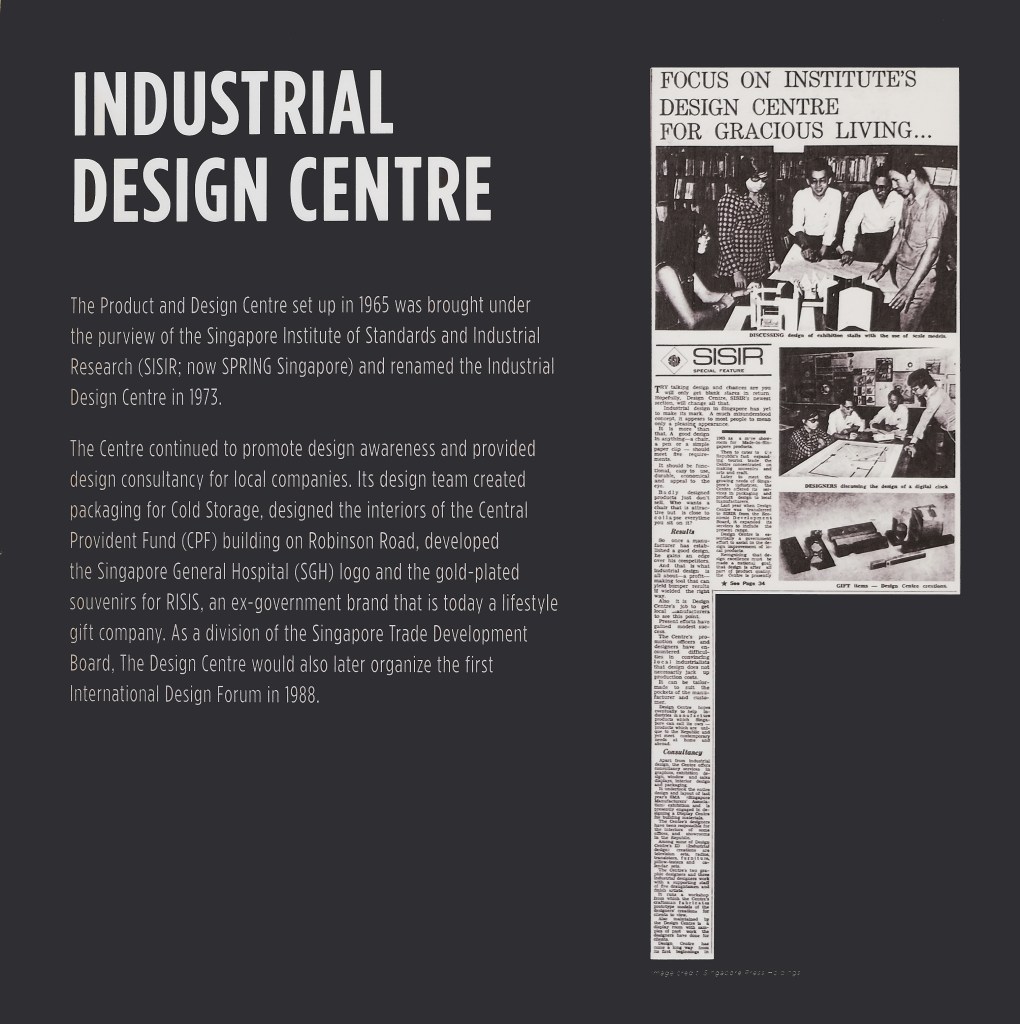 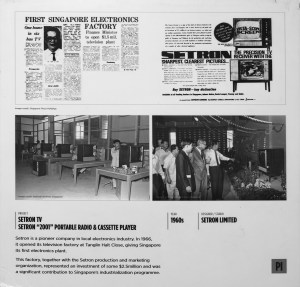 Setron Limited, one of the first electronic plants in Singapore 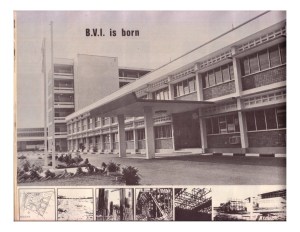 In the late 1970s and early 1980s, the country’s economy was thriving and on the back of the nation’s economic success, the local design industry began to take shape. During this period, the entry of foreign multinational corporations such as Philips, which invested in design research and development activities, heralded the start of an industrial scene in the country. This period saw the growth of local design houses and architecture. It was an innovative time where the creative impulse had changed with a sense of possibility.

The IT revolution of the 1980s precipitated a high-tech market and saw the local industry jumping on the bandwagon.  This period saw new technology such as personal computers and cell phones making their way into homes, schools and offices. Singapore’s high-tech industry expanded with international companies like Apple beginning to manufacture Macintosh computers in Singapore, and telecommunication companies – Motorola, Philips and Siemens – reinforcing and expanding their design capabilities here. This created a niche market for industrial designers in Singapore.
These were innovative years for local technology companies too. In 1984, Creative technology introduce the Cubic 99, the first PC to be designed and produced in Singapore. The successful Creative Sound blaster followed in 1989. As technology became increasingly mobile and stylish, independent local industrial design studios were engaged in developing portable and handheld devices. 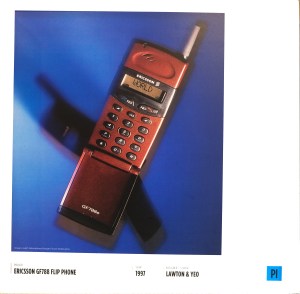 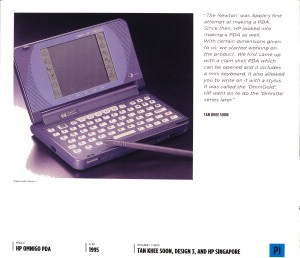 At the start of the new millennium, the design industry went global. Product designers were setting up their own brands, fashion designers were showing and exporting their designs overseas, photographers and visual communication designers were invited to work with international brand names. Key designs introduced at the time included the Ericsson GF788 second-generation flip phone designed by Lawton & Yeo Design Associates, the IPC Notebook by David Chen of Studio Industrial Design, and the handheld device HP OmniGo PDA by Tan Khee Soon of Design 3.

With international recognition a sense of local design identity and confidence to innovate further. To empower Singapore’s creative industry landscape, the DesignSingapore Council was created to help enhance the nation’s value proposition in design and contribute to the country’s economic growth. 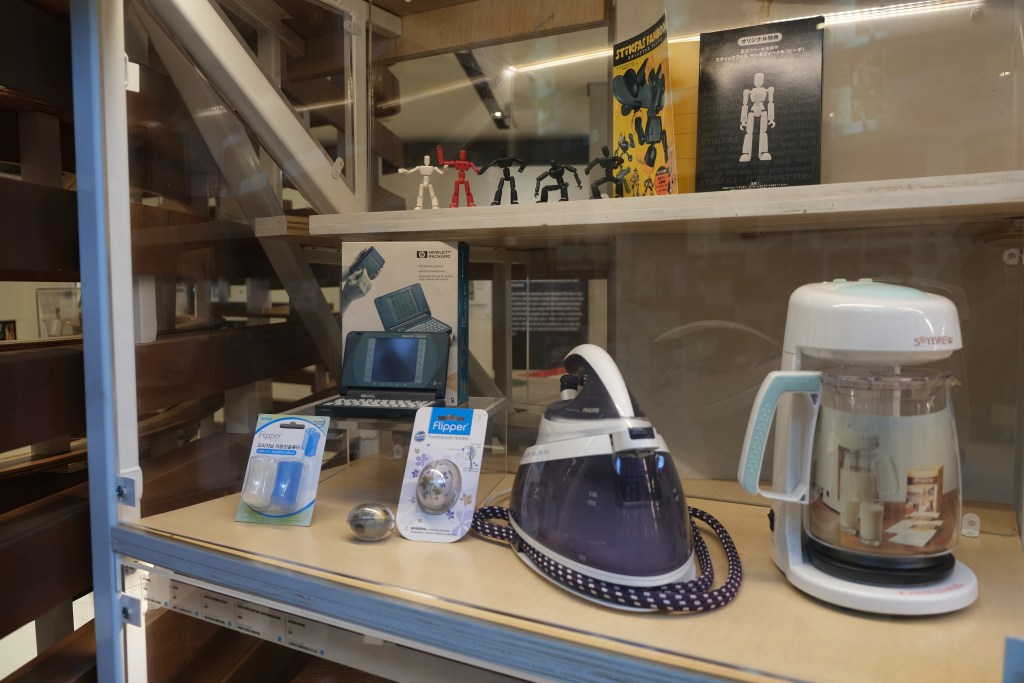 The Singapore design scene continued to grow into a vibrant creative culture. With the advancement of technology and the internet, designers around the country are working in a more fluid, borderless creative environment with faster speed and connections for global collaborations. During this period, there is a movement of “looking back”. This trend of returning to the roots is not just about nostalgia, but an active reinvention with an interest to preserve and conserve what has been done in the past. 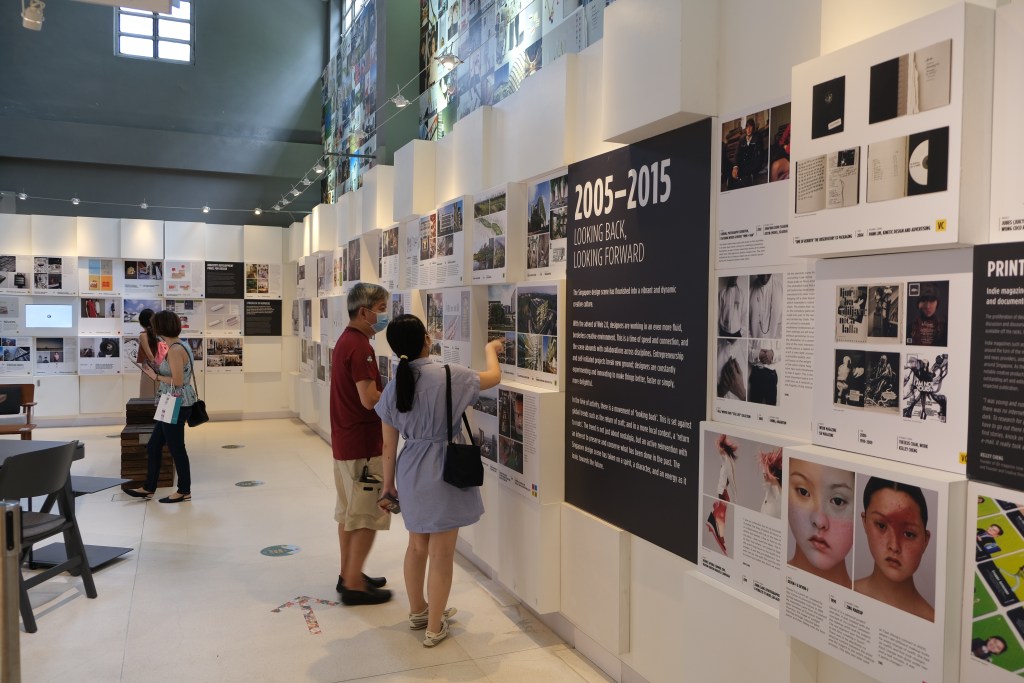 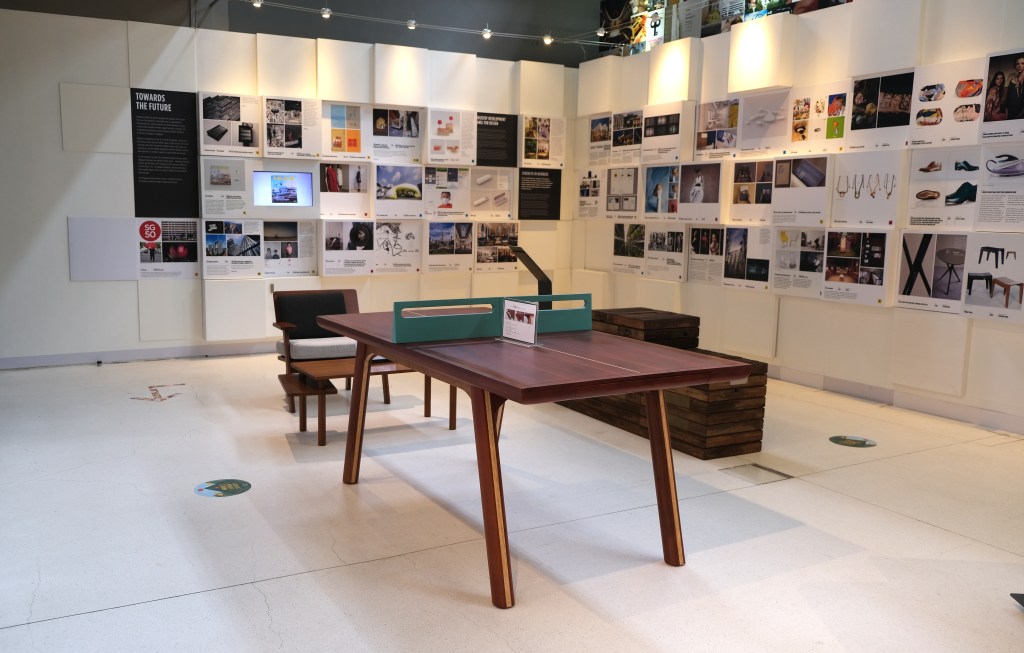 Exhibition highlighting some of the upcoming design related projects in Singapore

Singapore design has grown alongside the progress of the nation, from one that played an understated role of supporting the development of national identity and town planning to playing a strategic role in transforming business and in making a positive difference to the lives of people. The future of design will revolve around the creation of new value, new user experience and new market propositions that are flexible, sensitive and responsive to markets marked by the rapid growth and change.

This visit changed my perception of the design scene in Singapore. Prior to this, I have always assumed that Singapore is where it is today due to the STEAM industries. However, after visiting the exhibition, I became more aware of how design played a vital role in building a nation. The biggest take away for me was the newfound appreciation in my job as I am contributing to the design scene with my fellow designers at ASUS Design Centre Singapore.
At ASUS Design Centre Singapore, our designers create and innovate new and interesting products by understanding our users, as we too want to contribute to the design scene in Singapore. Follow our blog and Instagram page to find out more about our design stories.