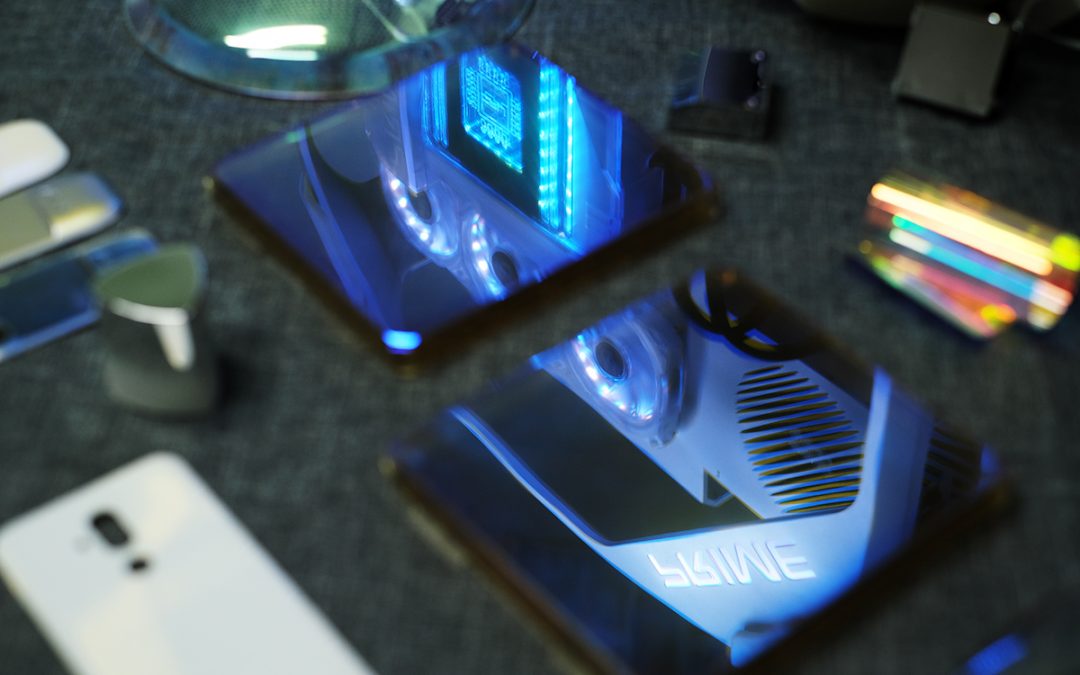 Some may not know about the simple motherboard on which ASUS was founded 30 years ago. The birth of the motherboard brought the personal computer to the market and opened the door for future generations of change. 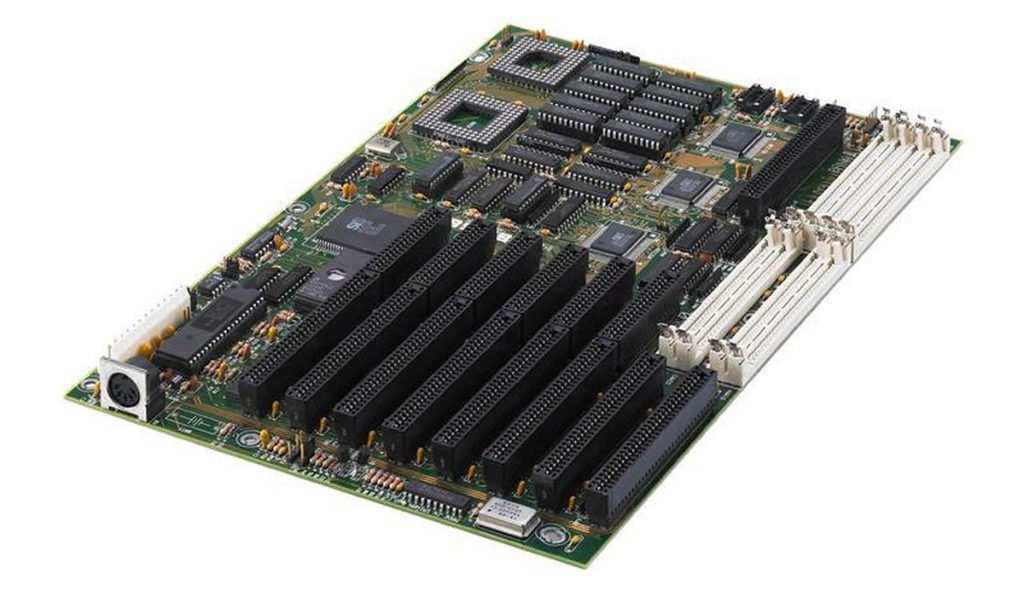 In 1989, the first ASUS motherboard ISA-386C was manufactured with a very simple and clean design.

The 30th-anniversary motherboard of ASUS is the Prime Utopia. The designers of this product very patiently explained the intricacies of motherboards to me, so I can better understand the design behind Prime Utopia.

The following is an in-depth interview with designers Martin, Ouyang, and William.

How does Prime Utopia stand out as a conceptual design amongst ASUS’s traditional motherboard designs?

Usually, we launch a conceptual design proposal every three years. The significance is to promote and lead the evolution of the industry and to open the market to new possibilities. For the 30th-anniversary we wanted to break the framework of existing motherboard designs.

Where did the inspiration for Prime Utopia come from?

Conceptual products are the first step in conveying our vision of the future. The aim is to advance technology and design, which are indispensable factors for innovation.

Every year, the ASUS Design Center conducts trend monitoring and workshops. A strong trend forecast for 2020 relates to space exploration, a blend of new and old traditions, and a natural mentality. With that on the horizon, we’ve designed technology with innovation to be in line with these trends. This is the key to Prime Utopia’s design. 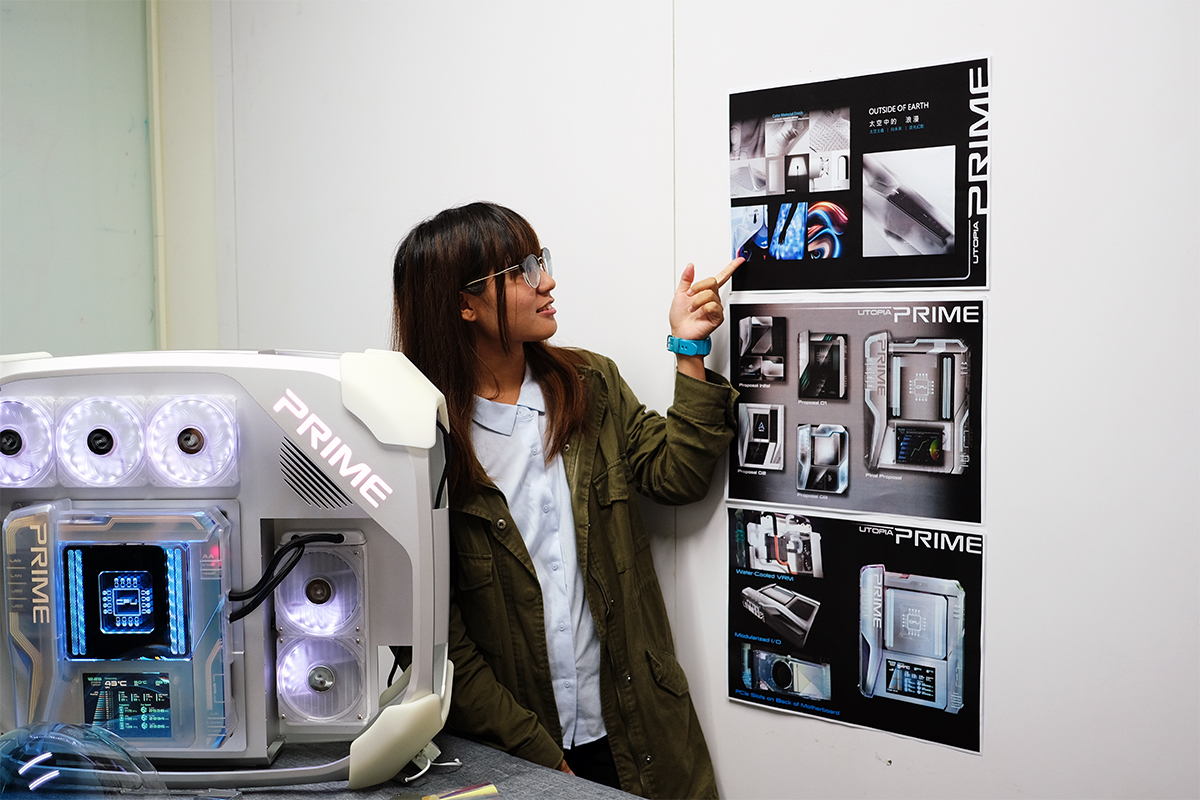 Cindy shares the conceptual process. An in-depth discussion of the trends in technology was a big part of this process. With such broad trends, the creative process allowed for many ideas.

How would you describe the design features and flow of the Prime Utopia?

Motherboard design is composed based on specifications. The market has a natural demand for better with each generation. Once specifications are set, a layout will be designed to accommodate those specs.

The concept for Prime Utopia dismisses the prerequisites for motherboard design and instead focuses on the potential of motherboard usability.

The goal of Prime Utopia was to make the motherboard no longer hidden. We wanted to bring out the user experience potential of the motherboard. We achieved this with an OLED touch display. Here BIOS parameters can be more easily accessed by the user. The screen can also be removed and placed elsewhere for ease of use. 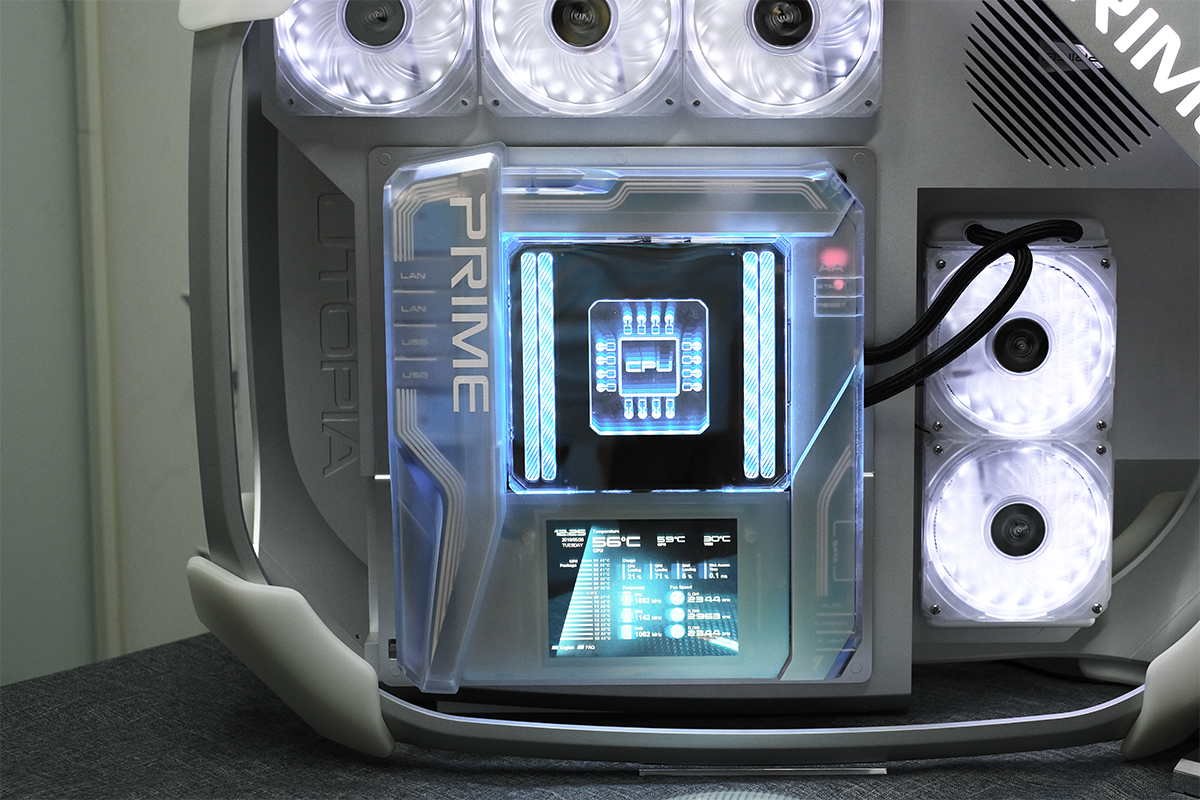 The UE team made efforts to make numerical operations, like temperature and overclock settings, presented more intuitively on the display.

When the motherboard is in a forward configuration, all components will be arranged differently, which is a big breakthrough.

For example, a traditional configuration with a rear-facing PCIe slot will be very hot, the space in the front of the chassis will accommodate expansion cards, M.2 SSD slots, cooling fans, etc. If you can separate heat-generating components like GPU’s, CPU’s, and SSD’s, you can avoid the accumulation of heat and stabilize the overall temperature of the build.

The new fan connection header is also designed on the motherboard. The new header can control 4 fan configurations at a time to allow more efficient use of space. 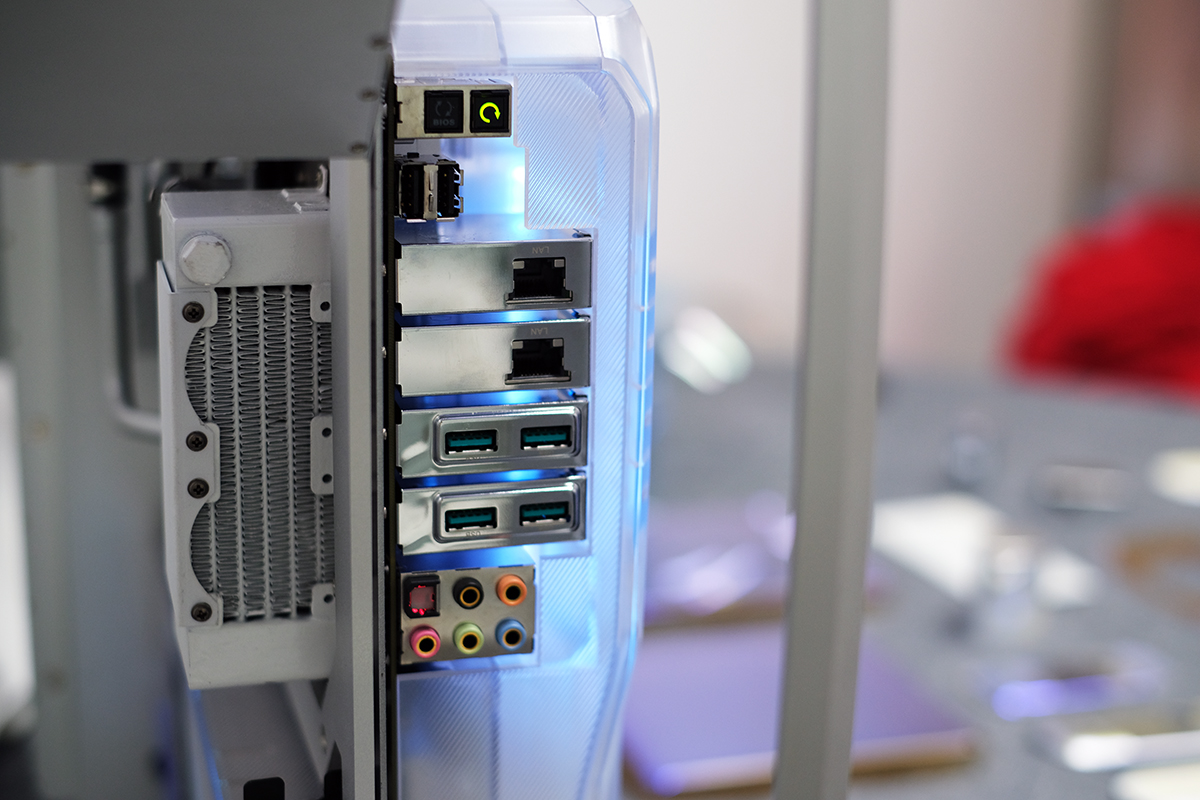 The I/O port is modularized and can be equipped with USB or network port according to users’ needs.

How about the concepts, trends, and links between CMF and Prime Utopia?

Like we previously discussed, the language collected for future trends indicates engagement in space, romance, imagination, and mystery. Trends can be associated with materials and colors, like the surface of Prime Utopia’s casing, the surface will change color depending on the angle you look at it from.

Many transparent keys and light points can be seen on the device. This was inspired by the bioluminescence of deep-sea creatures. The structure of the body resembles the ethereal mysterious appearance of a deep-sea jellyfish. 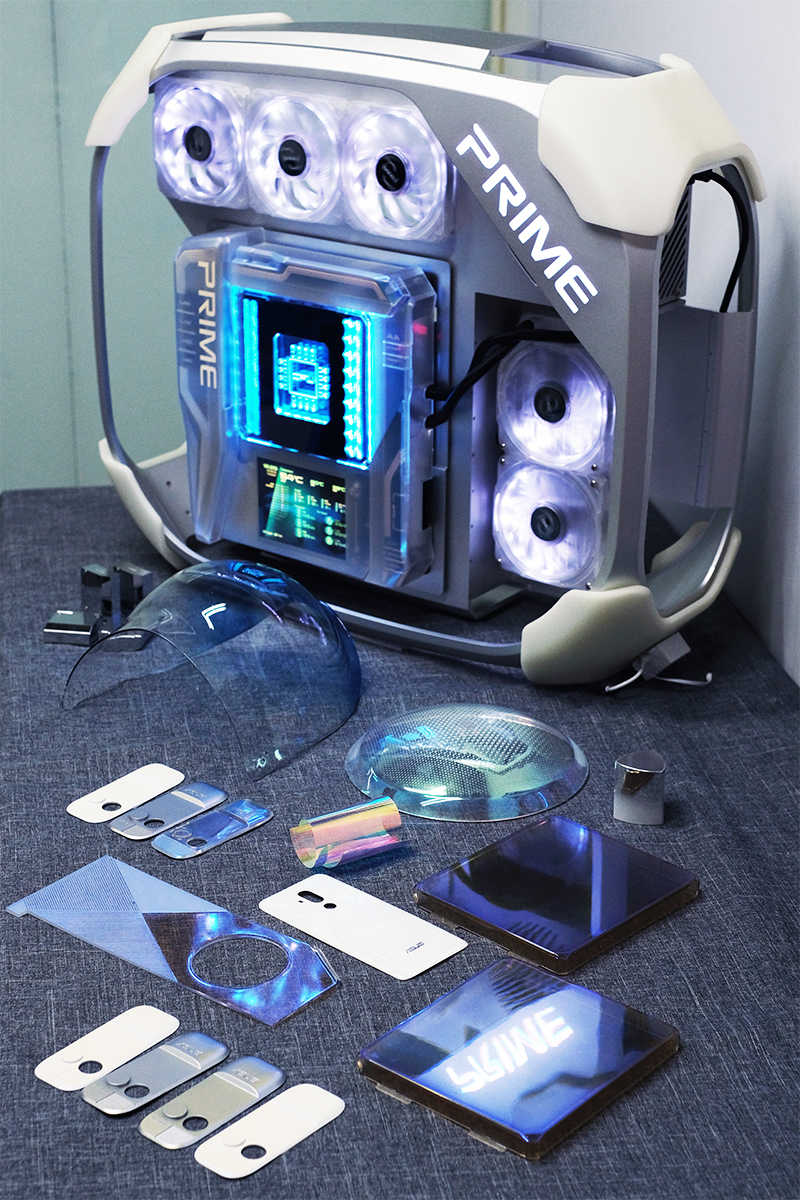 Can you talk about the evolution of design in ASUS motherboards?

(In an ancient narrator’s voice) In the beginning of time of motherboards… the appearance of the board was green and yellow PCB, with an additional configuration of components to focus on connectivity and performance.

Once the market began to advance, the image of the motherboard became important. At a very basic level, this included the use of quality materials, such as copper, and considered the color scheme of the board.

Recent years have seen an increase in light effects, utilizing LEDs to make the board closer to the user’s preference.

Edit: If you are interested, you can go to the official website to check out different styles of ASUS’s motherboards.

A group of humble but motivated motherboard designers

How was everyone’s experience working together to complete the Prime Utopia motherboard?

When designing a motherboard, there are no resources to waste. Users are starting to value aesthetics more and more, but at the end of the day, functional design is most important. With limited space and resources, motherboard designs can be beautiful and clever. All of us come from different professional backgrounds, so we used our collective knowledge to succeed. 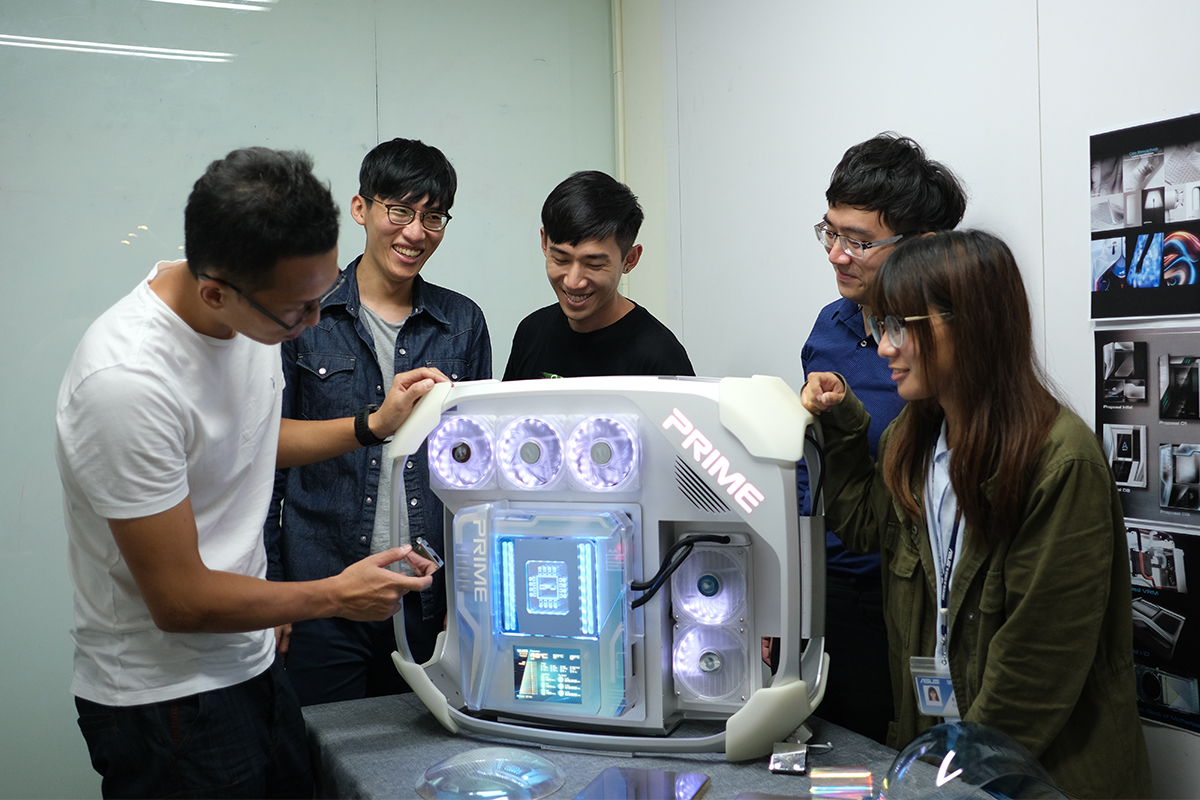 The design and execution of the project took about six months, which we are all very proud of. In addition to the ASUS Design Center, we also thank the cooperation of versatile departments such as Thermal, EE, UE, and more. There was no top to bottom instruction, each member of the team was proactive to accommodate and communicate with each other to make this awesome motherboard a reality. All of us are very happy to complete this case because it represents a framework for us to challenge the existing market.