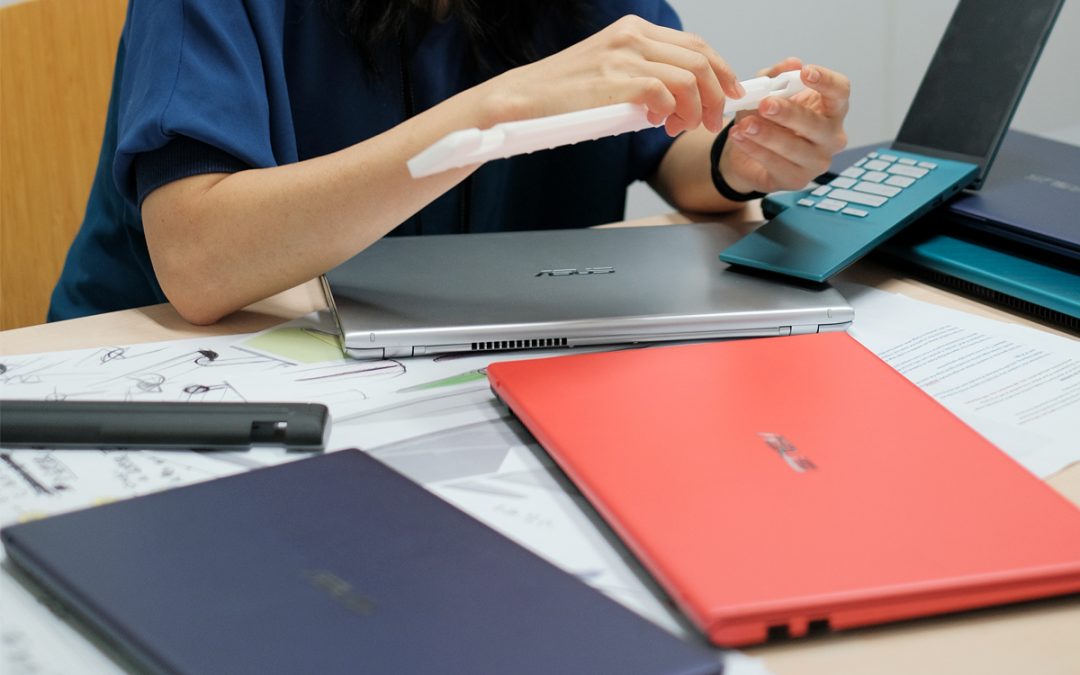 👆 Did anyone notice the video ASUS launched last month?👆

Believe it or not, everyone who appears in the film is NOT an actor. They are real painters, skaters, and rappers. Many people have been asking who did the soundtrack. Rapper Paigey Cakey (@mspaigeycakey), 26 year old from London, headlines the video; and you may have noticed a small cameo from the leader of ASUS’s launch this year: the VivoBook Series!

A lot of talent has been invested into the new VivoBook. Usually 2 or 3 designers are involved on a project, but for the VivoBook Series almost ten designers collaborated to create the best experience for our increasingly diverse world. Some of these designers are located in different countries. So, it is difficult to gather everyone who was involved for one interview. Joyce, one of the many designers, is here to represent the team that designed the VivoBook series. She will share the design story behind the notebook. (Notice Joyce also wears the same color as the VivoBoook Series Peacock Blue. She is the complete package, her salesmanship is amazing!) 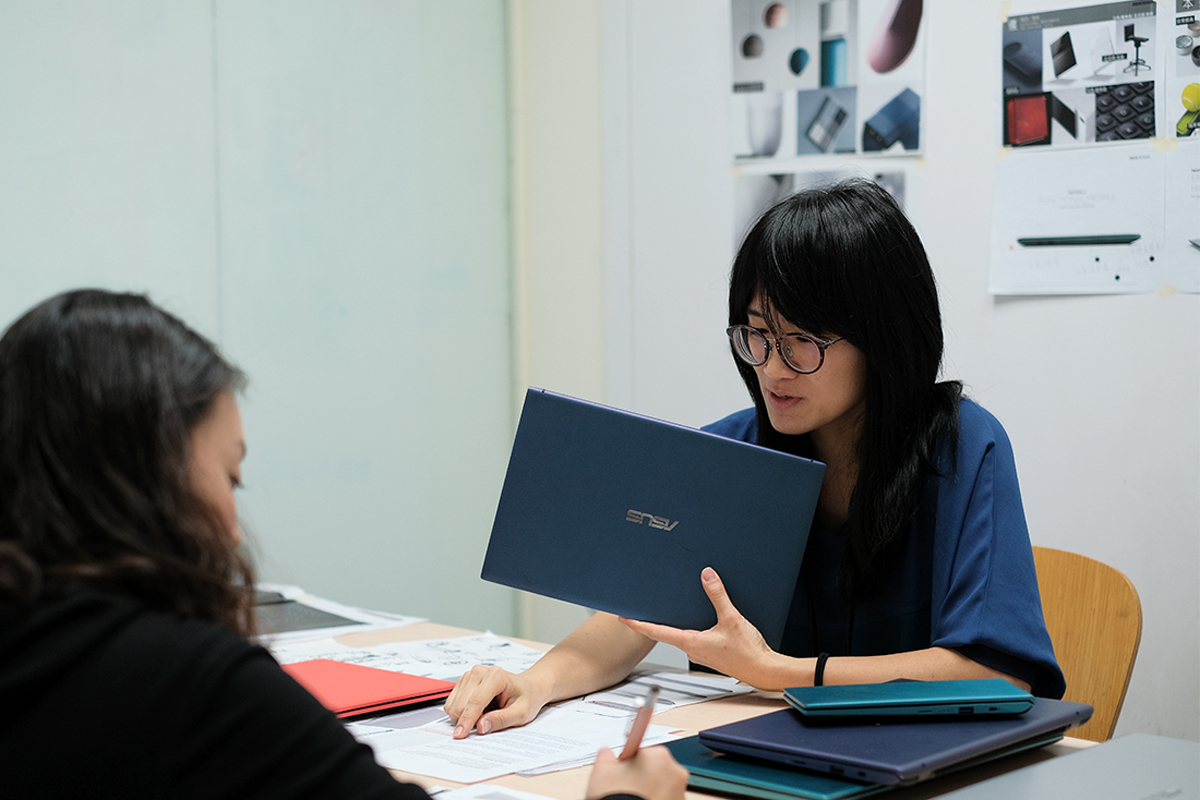 J: The focus of the VivoBook Series is to bridge the emotional gap between user and device. People shouldn’t feel burdened by a device, and we really wanted the VivoBook Series to be approachable. Something you feel excited to put in your bag and take with you. We wanted a more general appeal, without alienating users.

To get ourselves in this mindset, we focused on familiarity. We considered what makes an element approachable, be it a device or design feature. Versatile elements are important, but when every tiny detail is taken care of, a natural flow and style will follow. The goal was to design a device that is familiar but has its own unique personality. 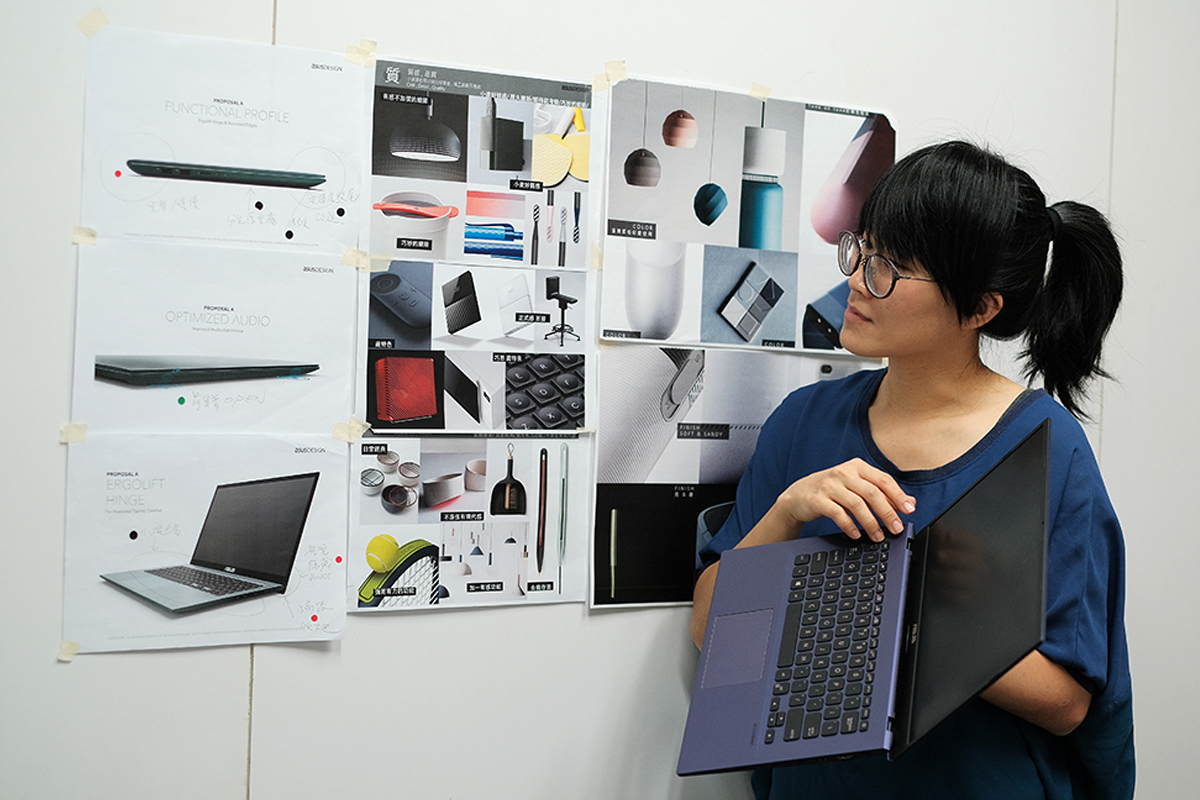 ▲ Joyce introduces the VivoBook Series concept Mood Boards. There are some clear representations of familiarity: such as the feel, shape, color, functionality, and the surrounding environment. ▲

ish: The space defined between extraordinary and ordinary is quite broad. It can evoke many different feelings and ideas. How is it possible for you to manifest these emotions into tangible features of a laptop?

J: You might not notice anything special about the device at first, but upon a closer inspection, the details really elevate the whole experience of the laptop. We’ve carefully considered the ergonomics of the VivoBook and how it should be held. We designed the device to match the curvature of your palm. Also, the back is easy and intuitive to hold and provides for a pleasant tactile experience. The curve of the back looks simple, but it is the product of intense scrutiny. We changed it and reevaluated many times to get the right fit. 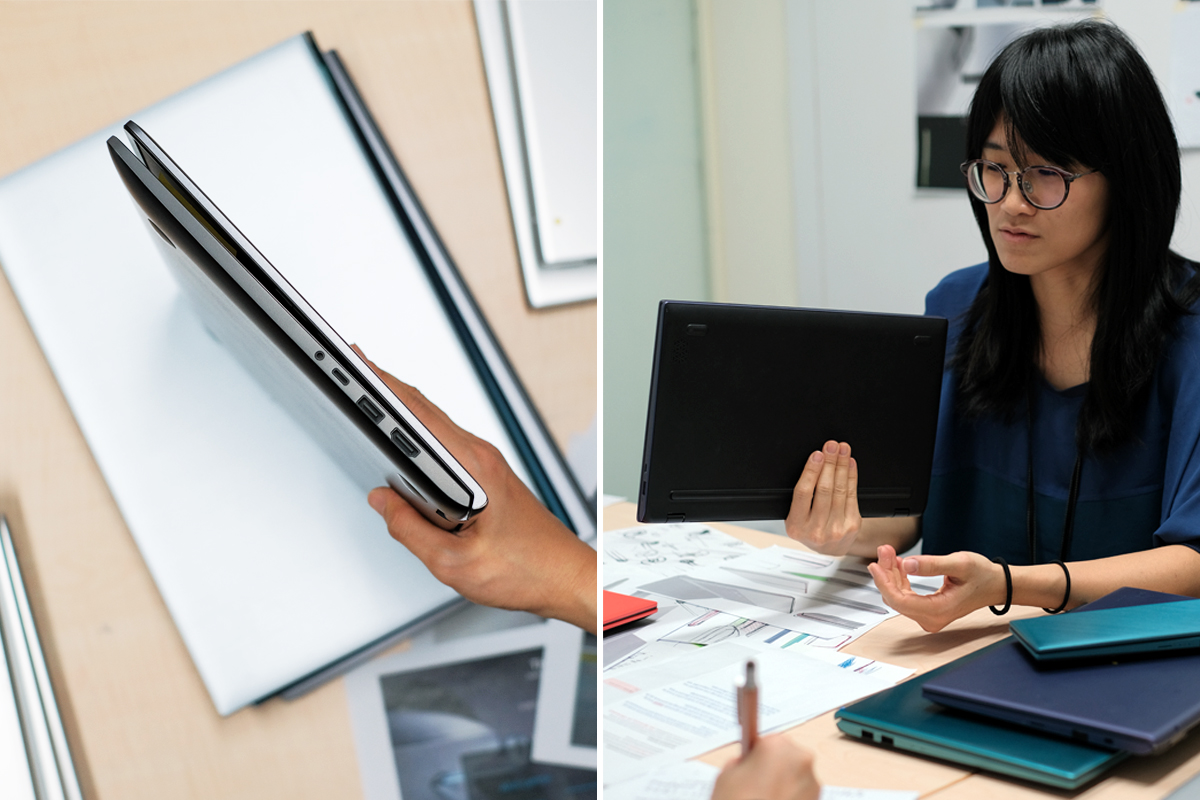 J: Once you open the notebook, you can see its familiarity and also unique personality. ASUS has done several well-received generations of speaker-hole designs, and now one unique to the the VivoBook. Also, we’ve added rounded key caps. We’re not boasting meticulous detail. Instead, we’re making simple design choices to satisfy the taste of more users (satisfying everyone is the hardest design challenge), and provide a design which won’t be quickly outdated. 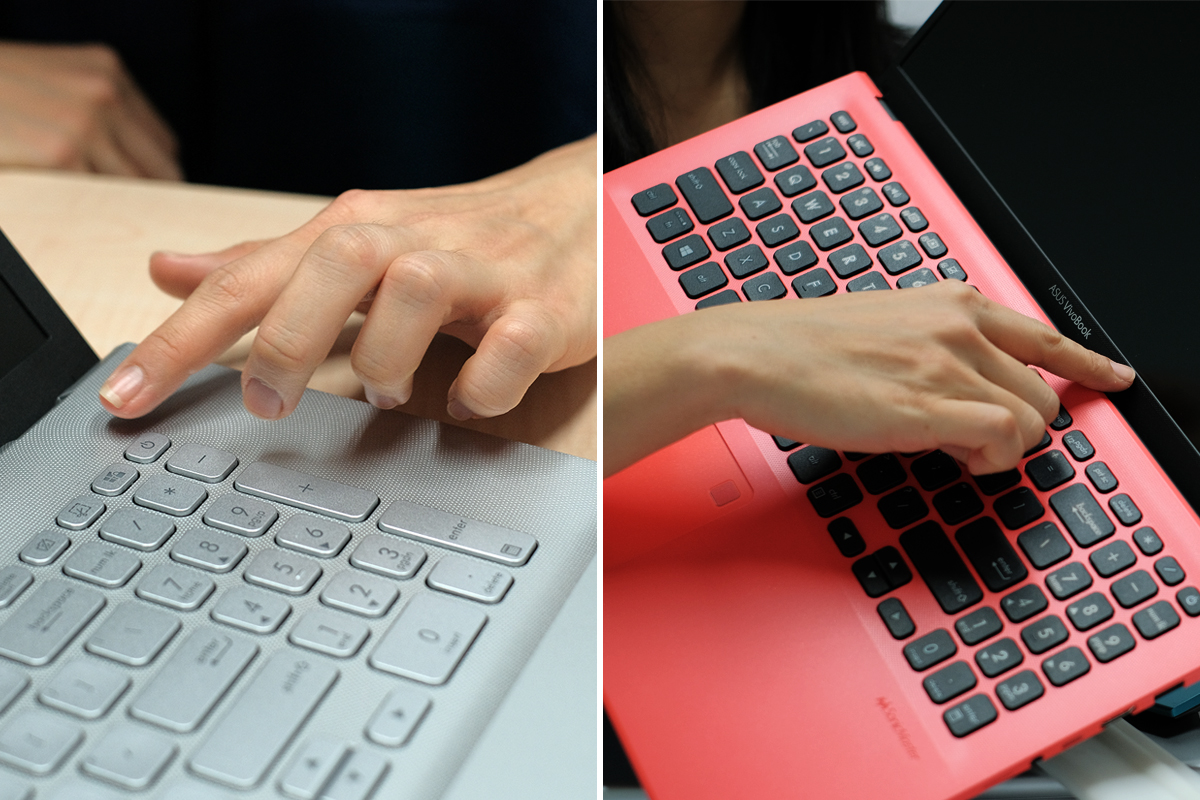 J: In addition, to express the optimism of the VivoBook, the use of materials was carefully considered. For example, colorful plastics can bring out comfortable and carefree feelings, while metal provides a more premium feel. The device utilizes a variety of CMF techniques: metal, iridescent finish, pearl finish, IMR film, and others, which usually only one or two of these are used on a general design. By providing these potions, we’re making people more imaginative and selective about the product.

(Just like decorating a Christmas tree, each person has different personalities, and although the body of the tree is the same, the outcome will always vary from person to person; I’m off topic.)

This notebook comes from a lot of subtle layered details. Each designer made a case for their design. In the end, everyone collaborated to come up with the best combination of detail. 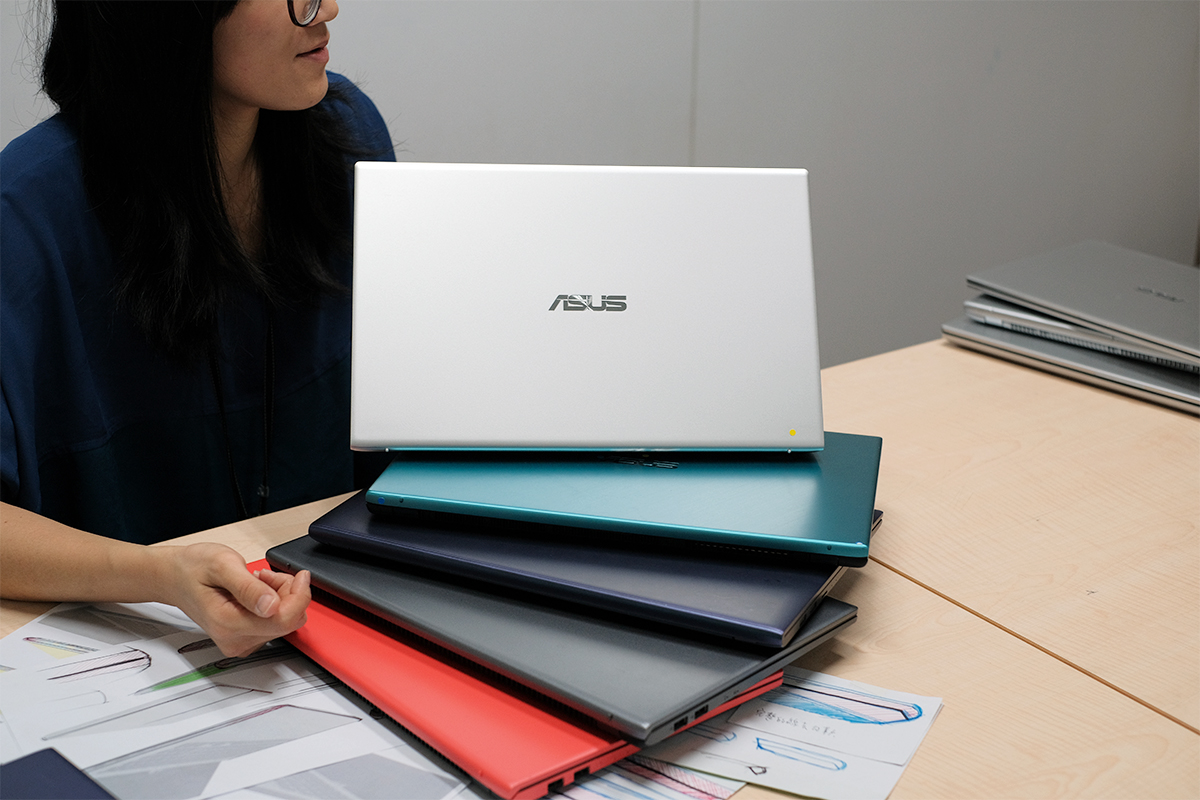 ▲ In the interview, Joyce discussed the opening mechanism. A lot of fine tuning went into the lid to improve the consistency of the shape. After realizing the common lip design contributes to a clumsy opening experience, the designers decided to remove it entirely. Throughout the process they tested many different angles to find the best radius around the keyboard edge. ▲

ish: On your journey of designing the new VivoBook, did you make any interesting discoveries?

J: We found out mainstream notebook consumers place immense value on the appearance of their device. Pennywise consumers want to see where their dollar goes. Specs are obviously important, but people really want something more attractive.

Another thing we learned is about designers. We all have an invisible “ruler” in our mind which we use to give a sense of measurement. Everyone has their own unique “ruler”, but everyone was able to use the measurement to effectively communicate with each other. It is like speaking another language, think “about the size of four USB ports” (Joyce says she found her inner rule almost 20 years ago) 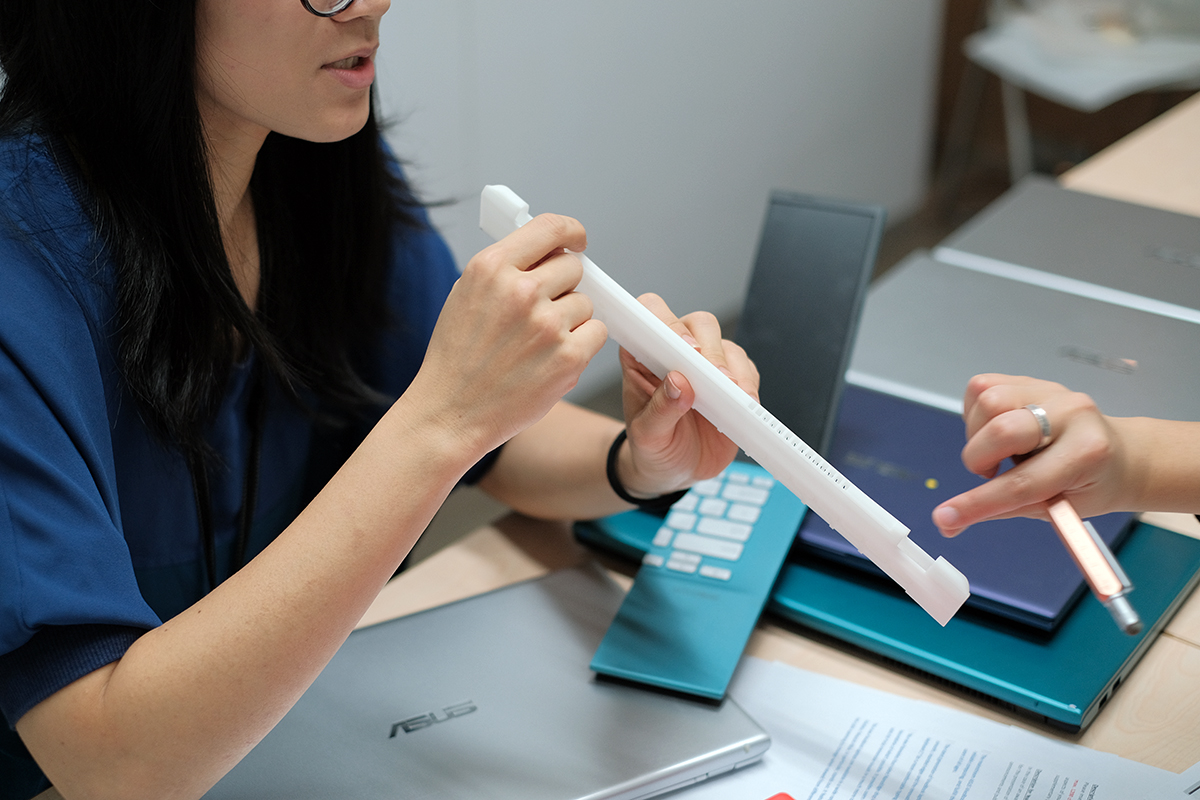 ish: I noticed you brought a lot of models today. Were these created during the design process?

J: That’s right. We frequently use Rapid Prototyping models, or build a quarter model to quickly swap design features. 3D drawings aren’t tangible, so having something you can handle allows you to get an immediate idea of how the finished product would feel in your hand.

The laptop’s hinge area also must be carefully designed. We treated it like the spine of a book. ErgoLift and the exhaust port are often difficult to design together, but we managed to squeeze many functions into the very small space. These features required collaboration with engineers of course, but the discussion surrounding these features was very free flowing. Sometimes a discussion with engineers feels like an equation, this time it was more of a conversation. 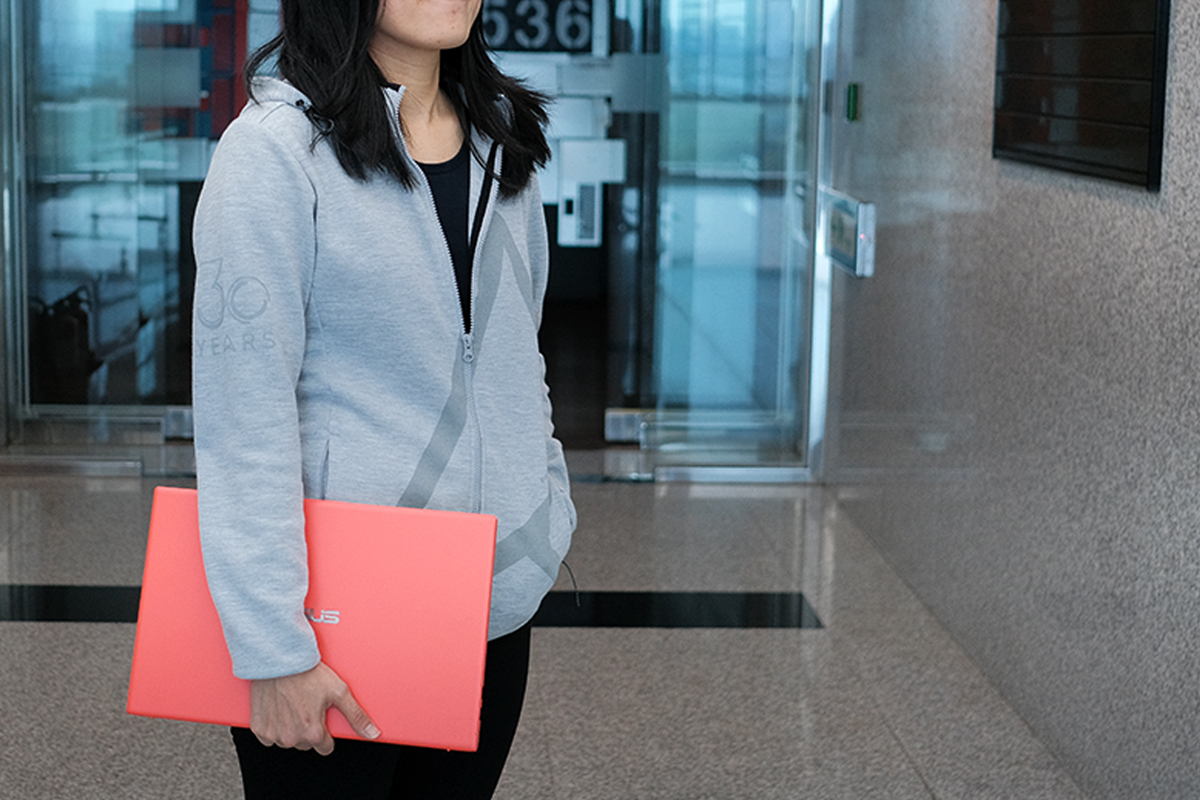 ish: Can you let us know how everyone felt once the laptop was fully designed?

J: We felt really proud. I can remember when we just finished it. Afterwards we carried it around, and lots of people asked us about it. They gave us lots of compliments, but couldn’t pinpoint exactly what about it was so great. And that was when we knew, it was actually all of the small details coming together to contribute overall.

The most satisfying moment was being able to provide a product which anyone can use. When each designer’s perspectives are justified, how do you find a balanced answer? We were able to. I would like to thank the entire design team for their dedication, teamwork, and perseverance.

▲ The VivoBook Series Designer team collection! The designers of the VivoBook are scattered throughout Taipei and Shanghai, so it is very lucky to have them all together for a group photo. More rare than finding a Dragon Ball! ▲

The VivoBook Series team brainstormed ideas and possibilities to complete the project in almost four months. I would like to share some of the wisdom gained during this interview: When facing difficult challenges, it is most important to find an entry point, even if it is a small one. When facing opposition, stay brave and keep your optimism. Keeping this mentality will lead you to ultimately succeed.

Thanks to the VivoBook Series team for us again #WowTheWorld!